EGC’s Craft Beverage Division Helps Worthy Cause for the Ukraine

EGC’s Craft Beverage Division became part of an exciting mission that aims to benefit the Ukraine: The "Make Peace Not War" campaign.

In an example where social media played a strong role in bringing about change for the better, this is the true story of how artistic creativity and marketing ingenuity came together—all because of an Instagram post. Presenting “Make Peace Not War,” a customizable beer label designed to help the people in war-torn Ukraine. 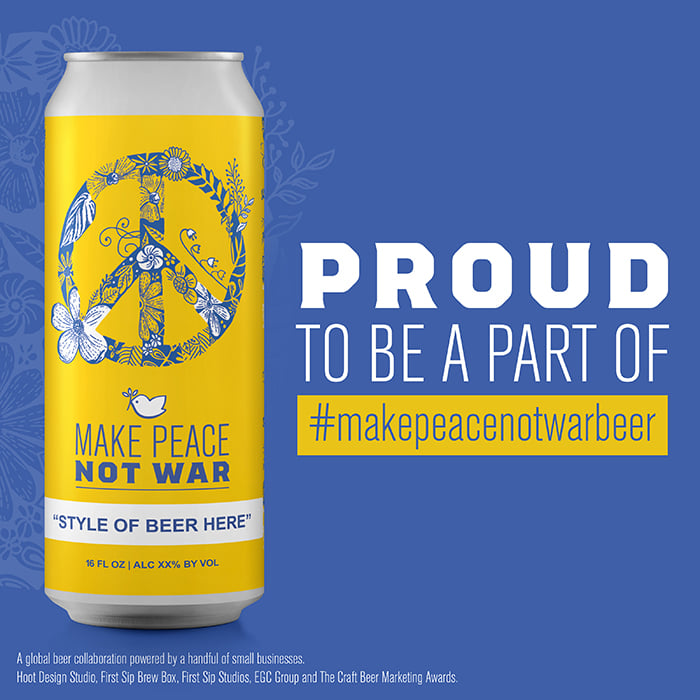 The “Make Peace Not War” movement is the brainchild of Jen Borror, an award-winning artist and graphic designer. As the owner of Hoot Design Studio in York, PA, Jen’s specialty is the branding, illustration, and design for the craft beer industry.

Shortly after Russia’s invasion, Jen felt a strong need to do something to help the Ukrainian effort. She channeled her artistic talents and created what became the “Make Peace Not War” design, posted it to her Instagram account, and quickly received a tremendous response. Among those respondents were Jackie DiBella-Curry, account manager of EGC Group’s Craft Beverage Division and co-founder of the Craft Beer Marketing Awards (CBMAS)—a competition which Jen has entered—and Dennis and Sammie Guy, co-founders of First Sip Brew Box, a craft beer gear subscription box service.

Jen explained her passion project to Jackie directly. Despite the “Make Peace Not War” design having won widespread approval from Instagram followers, it needed to be marketed properly in order to raise awareness—and funding for the Ukraine. And that’s where First Sip Brew Box and EGC’s Craft Beverage Division stepped in.

The marketing arrangement for the “Make Peace Not War” label is straightforward and direct: Craft brewers who are interested in participating in this project may add the name of their beer, logo, and beer style to the label and then distribute their product as a special “limited edition” selection.

The one condition explained in the marketing arrangement is that any craft brewers who wish to use the “Make Peace Not War Label” must donate at least 10 percent of any sales to a charity dedicated to helping the Ukrainian cause.

Jen’s strong desire to do something to help was infectious, as evidenced by these quotes from her marketing partners:

“Inspired by Jen’s label, we designed an exclusive Make Peace Not War First Sip Brew Box. It’s a limited edition run for those beer lovers who want to support the cause even further.”
— Dennis Guy, Co-founder of First Sip Brew Box

"Beer has the power to bring people together. And while beer and art might not be able to save the world, we’re hoping breweries—small and large—will join forces and use this label to raise awareness about the importance of peace in our lives.”
— Jackie DiBella-Curry, account manager of EGC Group’s Craft Beverage Division and co-founder of the Craft Beer Marketing Awards (CBMAS)

If you are a craft brewer and would like to participate in the "Make Peace Not War" campaign, click here.

May this unique and compassionate campaign bring even stronger awareness and funding to the people of the Ukraine.