Tap into the 18-to-24 demographic by using TikTok-style content to revitalize your brand’s engagement on other platforms.

How do we engage a new audience?

Banks and financial institutions typically don’t get high engagement levels on social as other relevant brands would, especially from a younger demographic—specifically those who are in the 18-to-24-year-old age range.

EGC’s research concluded that Jovia needed to pivot with the trends and made the recommendation to add TikTok to their social media program. This action increased Jovia’s engagement levels by 55%.

With EGC’s use of Instagram’s TikTok-style content—known as “Reels”—we were able to engage with a larger audience than Jovia already had on Instagram. EGC took a playful yet educational approach when launching Jovia's TikTok account by creating videos that tapped into the social trends which young people were already participating in themselves.

EGC continued to help Jovia keep track of what was trending on the platform with the creation of video content that related the trends back to banking with Jovia.

EGC also collaborated with national financial content creators and local influencers on behalf of Jovia to produce authentic, creative, and fun videos that again promoted Jovia's services back to the large audiences who already trusted this credit union.

In addition to utilizing influencers, EGC was excited to include Jovia staff members in these videos, since they are the genuine faces of the credit union. Each of Jovia’s top-performing TikTok/Instagram Reels feature staff members!

These efforts led to a 55% spike in engagement for Jovia. 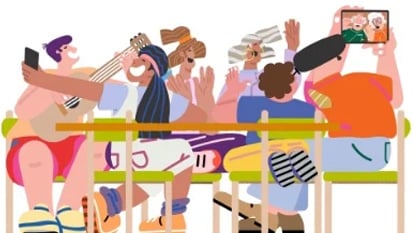 What did we learn?

Content-based, visual marketing via social media platforms such as Instagram or TikTok is crucial for financial institutions to successfully attract the attention of this younger demographic.

Delivering Jovia's content in short, digestible video stories proved to be the key to keeping younger audiences engaged in the long term, which in turn kept the brand name top of mind.