What Do You Think Facebook Should Do Next? Facebook’s No Good, Very Bad Week

The world stopped for many earlier in the week. As Facebook and a number of other social media platforms went into the dark, light was shone on questions about everything from corporate intrigue to social responsibility.

Facebook, Instagram, WhatsApp and Oculus all went down for six hours on Monday—the longest outage in some time—due to a configuration issue.

What happens when Facebook, Instagram and WhatsApp go down for a day? Influencers get a snow day and media buyers scramble. And, according to some data, people go elsewhere. Traffic to other destinations on the open web jumped by 21%. This is what an analysis conducted by Taboola of 9,000 digital publishers representing 500 million daily unique users shows. 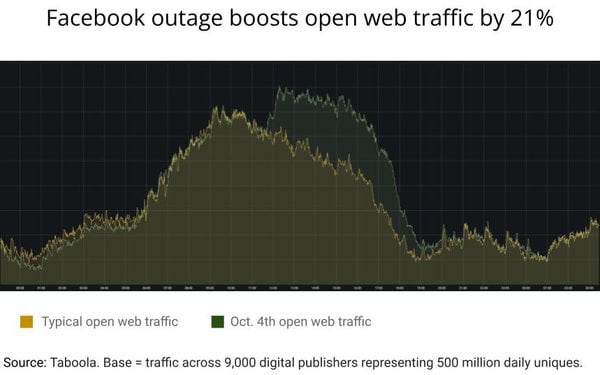 Frances Haugen, a former project manager of Facebook, has called out this platform and Instagram for “hurting kids and weakening democracy.”

Haugen testified before a Senate panel on Tuesday, telling lawmakers they must intervene to solve the “crisis” created by her former employer’s products.

In dialogue with receptive senators of both parties, Haugen, who focused on algorithm products in her work at Facebook, explained the importance to the company of algorithms that govern what shows up on users’ news feeds. She stated that a 2018 change to the content flow contributed to more divisiveness and ill will in a network ostensibly created to bring people closer together.

Despite the enmity that the new algorithms were feeding, she went on to say how Facebook found that they helped keep people coming back—a pattern that helped the social media giant sell more of the digital ads that generate most of its revenue.

As of this writing, Facebook stock fell about five percent.

The big question now is: What will Congress do next?

Should Facebook consider changing the feed back to chronological versus algorithmic, essentially returning the feed to how it operated in 2014?

Facebook uses machine learning (essentially their algorithm) to deliver content based on what you have viewed before, what you have engaged with, etc. It isn’t always positive, but it’s really a very normal way of delivering content from a digital perspective in today’s time. From an advertising point of view, the platform already has taken various significant steps to “self-regulate” by eliminating much of their audience targeting capabilities that would be discriminatory or harmful. Any further steps by Congress could be dangerous to freedoms.

I feel that these claims have truth behind them because we’ve all experienced the Facebook algorithms firsthand. We see in our own news feeds how the algorithms tease out our preferences and boosts content that keep us most engaged higher up in our feed. I do believe these algorithms increase polarization and division because it has the power to track how strongly users agree or disagree on different issues, and feeds them extreme viewpoints that commonly result in offensive posts and arguments on the platform.

From an advertising perspective, Facebook’s algorithm is beneficial because it can help businesses boost sales by marketing their product or service to users who engage with similar content on the platform. But from the perspective of the average user, I feel that the algorithm can be toxic due to the fact that it heavily feeds us information that backs up our own interests and opinions, teaching us to be small-minded and divided from those who don't think like us. I don't think a chronological timeline/feed is going to resolve the issue at hand; the content we want to see is available to us on the platform, whether or not they feed it to us or we find it ourselves.