Traditional and Digital Advertising in Sync for Better Results

We’ve all seen Twitter’s icon of the little blue bird with a few words that make up a “tweet”—either on the platform itself or in a screen capture. Now, these tweets are making their way to billboards. Yes, the age-old method of using a massive outdoor flat space to sell a product, brand, or any other enterprise is becoming home to images and messages normally viewed on computers and mobile devices. Titled the “manifestation” campaign, the phenomena of celebrities promoting themselves through Twitter messaging via billboard dimensions began in Toronto, Canada, and has made its way to seven cities in the United States.

What is the “manifestation” campaign?

As explained by David Brown in The Message, the “manifestation” campaign is a brainchild of Twitter which puts into visual action the theory of how positive thoughts and beliefs bring about equally positive change. One case in point is actress and writer Issa Rae of the HBO series, “Insecure,” who tweeted: “When I grow up, I want to be a more successful version of me.” 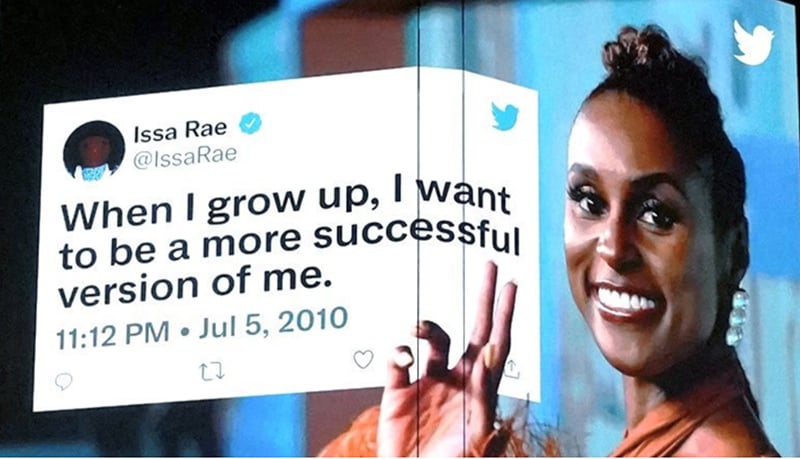 The question remains though: Why did Twitter choose billboard advertising? Answer: It works!

Twitter reports that this outside-the-box campaign has generated a lot of positive feedback—an extension of positive thoughts bringing positive change.

So, not only is traditional—in this case outdoor—advertising still relevant, but powerful in ways that might at first not be imagined. As Angela Mertz, Vice President, Integrated Media at EGC Group states:

“Out of home is a large scale, impactful ad space where your creativity can really shine. Combine this with the rise of data and new interactivity that is growing in the OOH space and it’s perfect for testing some of your brand’s most creative ideas.”

If you think your brand or business might benefit from a more traditional means of advertising, give EGC a call. In addition to innovative marketing strategies and executing creative campaigns, we offer media planning and buying services that can place your brand in front of potential customers. Let us manifest a more visible presence for you.