How Out of Home Advertising Can Outpace Expectations

Today, when you’re outside—whether on a walk, jog, or traveling by car, bus, or train—you may find yourself noticing more advertisements. These ads may appear on billboards, in bus shelters, or in train stations. No accident. No coincidence. Out-of-home (OOH) advertising is experiencing a comeback like never before.

The basics of how OOH advertising stands out

In an article for Forbes, David Astoria, founder and CEO of Pranos Inc., defines OOH as “omnipresent,” with a reach that can make a particularly strong impression on people. Unlike other ads that appear in the newspapers (where you can turn the page), or broadcast on television or radio (where you can change the channel), OOH advertising is difficult to ignore by virtue of the fact that it is immovable. Suppose you are waiting for a train or a bus. Any OOH ads placed at these locations are there—to be seen and remembered. Benefits of ads that appear outdoors include extra visibility, increased branding, and a savings of time and effort, among other positives. To further prove these points, consider the figures from last year…

The OOH advertising rise of 2021

While the online revolution has presented video, banner, and other digital ads to computer screens and mobile devices of users worldwide, OOH advertising has remained a strong venue where brands can make their presences known. In a recent report in The Drum, Webb Wright cites findings from the Out of Home Advertising Association of America (OAAA), which pointed out how—despite the setbacks brought on by the COVID-19 pandemic—there was a 16.7 percent increase of budgeting toward outdoor advertising in 2021. This allocating of ad dollars paid off, as the OOH industry saw a 37 percent increase in revenue by the finish of last year’s fourth quarter. As for this year and beyond, there was an interesting OOH campaign in January that was inspired by a very unlikely source…

OOH advertising is for businesses—big and small

Oftentimes, the outdoor ads on display promote well-known, easily recognizable brands. Mr. Astoria observes that the cost of billboards and other OOH collateral is pretty expensive. As modern technology advance, however, smaller independent businesses have more of a chance to promote their brand to the general public, and at an affordable price. A perfect example is the hybrid of traditional-melded-with digital format known as digital out-of-home advertising (DOOH). Established messaging is delivered to a targeted audience at a specific time. Since a particular ad will run at only a specified time frame, the brand or business is charged less.

If you would like to see how well your business might be promoted through out-of-home advertising, give EGC a call to find out how. Through the talents of our Creative team, combined with efficient media planning and buying, we can get your brand’s message out there, front and center—for real.

Case in point: A billboard display we created for Thomson Reuters as part of an integrated campaign promote its legal software, eDiscovery Point: 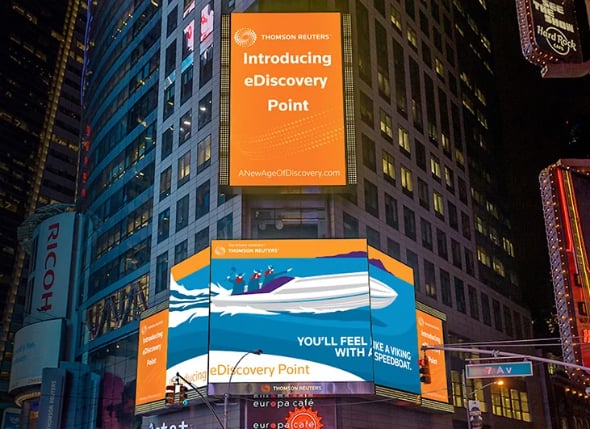 Click here to view more of this campaign and to watch a video case study.