In advertising, everything is primarily related to digital. Websites, digital ads and social media posts created to promote a brand have become standard. Traditional mediums (e.g., print, television radio) remain relevant in some circles, but don’t receive as much focus as digital. What some might forget, however, is that newer forms of advertising can be combined with traditional forms to create a powerful effect – and in more ways than one. Take out-of-home (OOH) advertising, for example.

Several years ago, Google acquired DoubleClick ad technology, and conducted experiments for displaying automated digital ads on a grand scale. These ads would rotate and change depending on time, place, and weather, among other factors. Google no longer uses DoubleClick, but the concept itself was interesting and a sign of how OOH advertising could benefit from technology. A hybrid of the two forms – digital out-of-home (DOOH) advertising – has quickly and steadily grown in the last few years and will continue to do so in 2019.

Out-of-home advertising – traditional and digital – in 2019

In an article for Martech Advisor, Matthew Schuster, Chief Revenue Officer at Vistar Media, offers predictions for the direction of where out-of-home advertising – both traditional and digital – is going:

Now for a switch…

The last point listed above may suggest that out-of-home advertising will only remain relevant by becoming digitized. Let's look at a different angle.

Last month, Jeff Beer reported in Fast Company on a unique trend among Instagram users: Snapping photos of billboards that appeal to them and posting them to the platform. Mr. Beer notes a statistic by Nielsen of how one-in-four Americans have posted an image of a billboard to the platform. This practice has been going on for a few years, but marketing professionals are now taking notice. Consider two standout scenarios Mr. Beer points out: 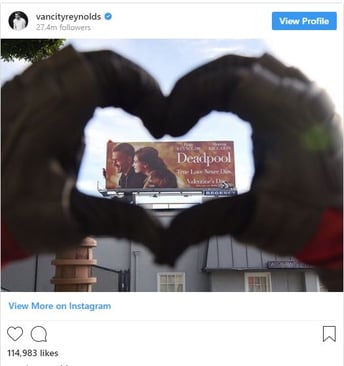 So, the reverse also works. The “meeting” of social media and traditional (read: print) of out-of-home advertising has effectively helped spread brand awareness. Both of the situations listed above also illustrate several forms of advertising – integrated, influencer, and organic – strongly in action.

As long as people travel by bus, train, subway, or even on foot, out-of-home advertising will remain a viable marketing option where brands can make their presences known. And while advances in technology ensure the future of this form of marketing, outside-the-box creative approaches to the more traditional form can also yield effective results.

Whether it is through traditional, digital, social, or any number of services, EGC can help bring increased visibility and awareness to your brand. Contact us today to learn more.